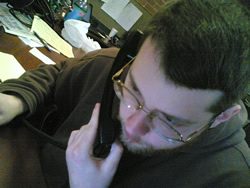 Hi. I’m James, the guy behind this site and a few others you might have run across. I’m a software developer.

I’ve worked freelance and full-time, back-end and front-end, in a variety of languages. I’ve worked with turnkey systems, I’ve customized off-the-shelf software and I’ve developed new applications, both from scratch and with the help of rapid development frameworks.

Where I come from

I majored in philosophy which, while rewarding, turns out not to have such great job prospects for someone who doesn’t particularly want to get a Ph.D. and go on to be a philosophy professor. As a result, all I had when I graduated was four years’ intense training in such useless skills as logic, critical thinking and abstract reasoning, none of which I could put on my résumé.

Meanwhile, I’d developed an interest in the web, mostly as a hobby, and was absolutely astonished the first time someone offered me money to build a site. After a brief stint in a typical “first job out of college” position at a health-insurance company, I struck out on my own as a freelance web developer and the rest is history.

After becoming involved with Django in late 2005, I spent five years at the Lawrence Journal-World of Lawrence, Kansas (where Django was originally developed), followed by four years at Mozilla, working on the Mozilla Developer Network. In early 2016 I picked up and moved across the country to the Bay area (the gravitational pull of which draws all developers, sooner or later, into its maw) and joined the tech team at a health-care startup.

In my spare time, I’m a member of the core team for the Django project, and I occasionally contribute code and documentation. I regularly write and release open-source software that’s free for anyone to use; once a problem has been solved, I don’t see why anyone else should have to beat their head against it again.

I also keep a semi-regular blog here, where I write about Django, general web development and whatever else I happen to be thinking about at a given moment.